As news  in the film industry goes, The Widow's Might is hardly a hot headline. Its moment in the sun was four long years ago, when it amazingly beat Fireproof to win first prize at SAICFF, America's largest Christian film festival. By now, the actors have all grown up, and many of the people involved have moved on. The film is no less worth watching today, however, than it was in 2009. It is a particularly inspiring piece for the homeschool crowd, as it was produced by two home-educating families. 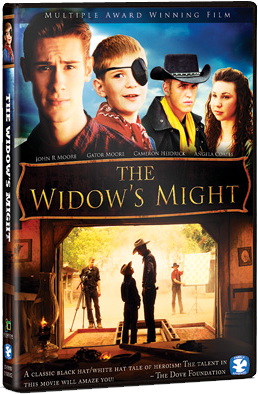 The start of The Widow's Might can be a little puzzling if you don't already understand the premise. Much of this confusion is due to the fact that many of the characters - but not all - use their real personas. "John Moore," for instance, one of the two protagonists, really is named John Moore, and he really is a filmmaker. But John's friend, fellow filmmaker and musician "Cameron Cavillo," is really Cameron Heidrick, and is not, to my knowledge, either a musician or a filmmaker.

Once you get through the opening scenes and into the story, it's quite easy to follow: A poor widow is about to lose her home, so a bunch of homeschoolers make a movie to help promote her cause. Along the way it gets quite wacky, pretty entertaining, and sometimes rather poignant.

We all know the age-old director's drill - "Lights... camera... action!" While the production team provided the "action" themselves, they were smart enough to hire outside help for the lights and camera. Lighting, an unsung but absolutely crucial element of every film, was handled by Chip Lake, an industry pro who filled the same role for Time-Changer. James Burgess, whose specialty is the RED ONE camera (if you know anything about modern filmmaking, you know what I mean) served as director of photography, and his skill set proved complementary to John's.

When you add a ton of hard work to this foundation of experience, the result is a great project. The Widow's Might looks good and sounds good, which in the end is pretty much all that counts in production quality. It could be placed side by side with any Christian film and stay competitive - as its shocking SAICFF victory over Fireproof demonstrated.

While The Widow's Might is not itself a musical, the movie that they're making inside the movie is. It contains several songs that serve to narrate the story, performed mostly by Angela Coates and John Moore. Judged according to the standards of an actual movie, the lyrics to these songs would be considered pure cheese. In the context of a wild-west operetta, however, they make sense. And the score is top-notch, with a throbbing theme that echoes at appropriate moments throughout the film.

They kept it short, but it still seems long

Often, amateur films tend to be too long, stretched out of proportion by sloppy scripts and poor editing. While The Widow's Might studiously avoids this trap, it somehow manages to make ninety-odd minutes feel like about two hours. Example: At one point in the movie, Angela Coates sings a mournful ballad that stretches something over five minutes (and if you'd asked me to estimate that before I actually timed it, I would have said it seemed like eight or nine). Now don't get me wrong - it's a pretty song and Angela has a great voice. But after this five-minute lullaby, I'm more ready for a nap than for watching the rest of the movie.

Fortunately, these slow-lane scenes are few. And overall, I must say that the movie feels long and interesting as opposed to long and boring.

Due to the realities of the independent film industry, actors tend to be in short supply - particularly for smaller productions like The Widow's Might. The Moores and Morelands solved this problem mostly by casting the movie from their own families. These family members, and the volunteers who fill out the rest of the parts, display varying degrees of acting talent.

The stars all turn in good performances, with just a few rough spots toward the beginning. There are a couple of shaky moments with the supporting actors, but also some surprisingly strong showings, such as Terry Taylor's interpretation of the scheming mayor. And Gator Moore, John's younger brother with the fake eye patch, manages to steal pretty much every scene where he appears.

Fans of conservative documentarian Colin Gunn will be delighted to see him in the role of Wally the mailman. Colin is a great actor, and the writing team created a role that plays perfectly to his strengths. The Wally scenes are some of the most genuinely funny parts of the movie.

Is this an "anti-tax" movie?

Every story must have conflict, and in this movie, the conflict centers around a widow losing her home due to property taxes. But, moving beyond the particular case, the Moores go on to complain strongly about property taxes in general, with one character dubbing all such taxes "immoral." They go even further in the un-scripted producer commentary track, where someone (John, I believe) says essentially that there might be a justification for some kinds of taxes, but not for a property tax.

That said, the overall tone of the movie is not as political as you might imagine. It is mainly a story about people rather than policies, and its message resonates no matter what your persuasion regarding taxes. It's about standing up for your beliefs and supporting those who can't stand on their own - even when the price of doing so might prove high.

Is one of the characters really a brat?

The movie's trailer features a scene in which ten-year-old Gator Moore mouths off to the town mayor, and older brother John backs him up. This gave me the impression that The Widow's Might is about smart-mouth, out-of-control kids who have no respect for authority. Which is unfortunate, because that impression is incorrect. This one scene is the only occasion in the movie where any of the kids are less than respectful to adults.

In real life, the Moores are the kind of folks who refer to their elders as Mister and Missus. Gator, to his credit and that of his parents, was uncomfortable acting disrespectful even in make-believe. He agreed to say the lines once his dad gave the green light, but concerns persisted for some family members that the scene could tarnish the movie.

In the end a compromise was reached, resulting in an attempt to fix the situation during the film's last moments. I'll leave it to you to judge how well that came off, but personally, I appreciated the fact that they at least tried to mollify any offense.

If you have future movie creators in your house, The Widow's Might is worth the purchase price just as teaching material. Personally, I watched all the special features, and also re-watched the whole movie twice in order to take in both the cast and producer commentaries. And I'm not even an aspiring filmmaker - just somebody who finds the craft interesting in a theoretical way. The special features are a gold mine of fascinating inside information.

If your DVD player should happen to squeak while running The Widow's Might, don't worry. It's normal when watching a movie this clean. Seriously, there is not the slightest fragment of a questionable word to be heard, and all the ladies wear skirts. I could completely relax while watching The Widow's Might. That is a rare thing even for Christian movies, and I appreciate it deeply.

The Widow's Might deserved its award at SAICFF, and it deserves your attention now. If your family hasn't yet enjoyed this clean and delightful piece of conservative Christian theater, I would encourage you to check it out today.

Disclosure: I reviewed this movie because I liked it. No one asked me to, or provided me any compensation for doing so. And that's not an affiliate link.