The Sparrow Has Landed

Today I'm pleased to announce the publication of my first Christian novel, The Sparrow Found A House. This is a work of contemporary fiction targeted toward young adult homeschoolers, but suitable for all ages and groups. The plot revolves around the Rivera children, four average kids in the Midwest whose father died several years previously. As the story opens, their mother has just married again, and her pick is a doozy - a conservative Christian who has just retired from the US Army. 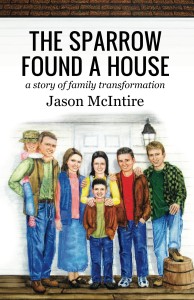 Sergeant Sparrow takes his role as a stepfather seriously, but he's also fun and likable - so much so that the younger kids, Moe and Katie, "adopt" him at once. Oldest brother Chris - shiftless, insecure, and overweight - isn't far behind. Fifteen-year-old Jessie, however, is determined to resist the Sergeant and impede his plans in every way short of open rebellion.

As the front cover emphasizes, The Sparrow Found A House is primarily a story about transformation. It's about the truth that even "nice" people need Jesus in their lives, and that following Jesus means more than affirming a doctrine and attending a church. It's about the small inward changes that make the big outward changes possible.

I like to think that there is a good bit of humor and entertainment value to be found in the pages of this novel. However, that isn't the main point. If my story makes you chuckle and want to read more, I'm happy. But if it draws you toward Jesus even a little - if it makes you think about God and his Word and want to follow Him more closely - then I've done my job.

The Sparrow Found A House is available both as a softcover book and a free digital edition, which you can get by registering through our Free Christian Novels page. The book may also be purchased on Amazon.com.