Book Review: "Through Stress And Strain" From Salem Ridge Press

As a casual follower of the homeschool blogosphere, I generally get a sense of what products are making the "review rounds." Recently my eye was caught by the Salem Ridge Press collection - children's stories from long ago that have been republished and annotated for the modern reader. I knew right away that I wanted to sample one of these books.

The book I requested is called Through Stress And Strain: A Story of the Huguenot Persecution. It was written by a prolific 19th-Century British author who penned many children's books under the name of Emma Leslie. Of all the the titles offered by Salem Ridge Press, I was particularly interested in this one because I have always been curious about French Protestants. (There is even a vague possibility that our family descended from Huguenots, but such a link is just beyond the recorded genealogy.) 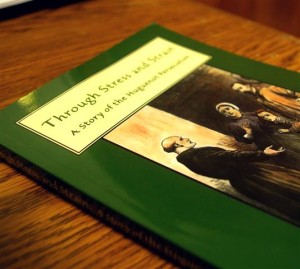 Imagine a time when many Christians have become economically prosperous but spiritually cold, more concerned with fitting in than with pleasing God. They try to keep their positions in society through compromise, while preserving their freedom through political activism. Some strive to remain faithful to God, only to find their children pulled away from them by the culture - and increasingly, by the government.

While the above scenario might sound familiar from today, what I'm describing is the world of 17th-Century France as portrayed by Emma Leslie. Her story centers around the Marot family, Huguenot peasants who find their children being taken away from them and forced into a Catholic "education." This is a story of God's faithfulness in the midst of trials, and about the power of God's Word hidden in even the heart of a child.

When you say "Victorian," most people hear "stuffy" - to the point of suffocation. Women wearing enough material to make the sails for a trans-oceanic clipper ship. Atrocious lace-up boots that required crocheting skill to put on. Men sporting outrageously sculpted facial hair and equally outrageous hats. And yes, eye-rolling morality novels about seraphic children such as you would never meet in real life.

Despite the odd styles and quaint sensibilities of their time, Victorian Christians actually had a lot on the ball. It was they who fought to end slavery, and to curb epidemic alcoholism. They gave us such men of faith as Charles Haddon Spurgeon, George Mueller, and D.L. Moody. They handed down the Salvation Army, and the whole concept of modern missions.

The Victorians also produced a large volume of Christian literature that remains relevant today. While much of their children's fiction was indeed rosy-cheeked idealism intended to uplift the reader through good examples, some was a shade more realistic and challenging. Through Stress And Strain is in the latter category.

Salem Ridge advertises that this book is suitable for the third grade and up. I would tend to agree, provided that we're talking about well-educated third-graders. I could have easily digested this book when I was eight, and I doubt there are many homeschoolers of that age who would find it a major problem.

On a scale of one to ten, with Uncle Wiggily at the low end and the original Pilgrims' Progress at the high, I would put Through Stress And Strain around a six. The words are big, the sentences are long, and some of the authentic French names could present a tripping hazard for readers of any age. Take Nimes, for instance, the name of a city that figures prominently in the story. Only someone with a basic knowledge of French would know that it's supposed to be said nee-muh, as there are no phonetics included.

To moderate the advanced vocabulary, the publisher has painstakingly included footnotes defining less-familiar words. Some of these are archaic terms like breviary (a Catholic prayer-book); some are ordinary modern words used in an archaic context, such as gossip for friend. Others are common, but just long - for example, evasively.

Also on the plus side for readability, the story is very simple, there are few characters, and important plot points are covered thoroughly.

Through Stress And Strain was never boring to me. I read the first two-thirds at one stretch, stopping only due to bedtime. While the book isn't exactly the Victorian equivalent of a spy thriller, it is a well-written piece that creates empathy with the characters and a desire to see what will happen to them.

The book runs 149 pages, but in large type with generous line spacing. I would guess it has about 25,000 words - certainly downward of 30,000. The story starts at a leisurely pace, with twenty pages of protracted dialog. It seems to pick up speed as it goes along, until at the end, it makes a sudden mad dash for the finish line. The last chapter, which brings seismic shifts to the lives of the characters and serves to tie up the entire plot, runs only twelve pages, and the whole story comprises just eight chapters.

Speaking of chapters, I suggest you skip the Table of Contents the first time you read the book. Victorian chapter names tended to be less than subtle, and the last one pretty much gives the story away.

This is an historical novel, written only a couple of centuries after the period it depicts, and interesting facts about this time flow easily from the author's pen. I was, for example, intrigued to learn that silk worm farming was a major industry for French Huguenots, as was chestnut-growing. The attitudes and daily concerns of the characters feel quite realistic, and paint a more personal picture of that time and place in history.

Biblical Christian families can read Through Stress And Strain with no fear as to its doctrinal content. (Unless, of course, you happen to have a hyper-sensitivity to words like "Calvin" and "Geneva" being mentioned favorably. Like it or not, the Huguenots were Reformed.)

I appreciated the simple way that Leslie explains the difference between Catholicism and biblical Christianity, using conversation and a memorable analogy. Though Catholics are of necessity the bad guys in this book, they are not all tarred as arch-villains. The local priest, who is obliged to take an active role in persecuting the Huguenots, is described as a kindly soul. And later, a monk... well, I can't give away the story.

As one would expect from a Victorian novel, high standards of personal integrity are upheld throughout. For example, when the two brothers are forced into some absolutely necessary dissimulation (pretending they don't know each other) Leslie spends several paragraphs explaining how this is permissible under the circumstances.

Neither stressful nor a strain to read

This book would be a worthy addition to any biblical Christian's library. While its reading level could be a challenge for some younger children, that isn't necessarily a bad thing. If we never challenged ourselves to read higher, we'd all be stuck forever reading Dick And Jane over and over again. The vocabulary and footnotes alone ensure that there will be plenty of teachable moments as your family reads through the story.

The main point of Through Stress And Strain is both clear and relevant: When a child has been trained up rightly in God's Word, no outside force can take him from the hand of the Good Shepherd, even though it may separate him from his earthly family.

May we all be encouraged to redouble our efforts as we hide the Word within.

Disclosure: I was provided with a free copy of Through Stress And Strain in exchange for my honest review.