My Favorite Movie From The Kendrick Brothers

Ten years ago last April, a church in Georgia released a movie. The church was Sherwood Baptist of Albany, and the movie producers were the Kendrick brothers and their friends. This movie, however, was not named Courageous, Fireproof, or even Facing The Giants. It was called Flywheel. I frequently meet people who have watched one or two of the others, but have never even heard of this one. It's worth remembering. In a sense, it was the movie that spawned the independent Christian film industry. It also set an example that more Christian movies would do well to follow. 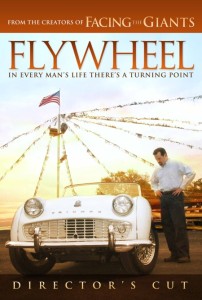 The textbook example of doing a lot with a little

I remember being impressed when I heard that Facing The Giants, Sherwood's first big hit - the one that pretty much eclipsed Flywheel - was made on a budget slightly of over a hundred thousand dollars. On a Hollywood movie set these days, that wouldn't even pay for the snacks. Yet Flywheel, which started it all, was made for just twenty thousand dollars, most of which went directly into equipment. Everyone who worked on Flywheel was a volunteer. None of them had ever made a movie. They knew nothing about lighting, sound, or makeup. As Alex Kendrick put it, "We'd be looking at each other saying, 'Okay, who knows how to do this? Who knows how to do that?'" The sets were lit with Home Depot work lights diffused by homemade reflectors. The camera car was a scratch-built dolly running over PVC pipe tracks. The jib crane was made out of what looked like electrical cable tray. The makeup artists were ladies from the church. I have seen Christian movies that benefited from state-of-the-art equipment, paid actors, and professional crews - and were almost painfully bad. I've seen some that looked and sounded great, but were so boring I could barely stay to the end (and in some cases, didn't). I've seen others that were both well-produced and interesting, but carried such a muddled message that I was never sure I got the point. These movies proved that you can't spend enough money to ensure a good film. But the corollary also holds: A lack of money doesn't necessarily condemn a project to failure - especially when the guys behind it are dedicated, talented, and depending completely on God. Anyone who doubts this should watch Flywheel. It's hard-hitting; it's funny; and it doesn't contain a boring minute. Granted, the lighting is a little weird once or twice and the picture doesn't quite live up to hi-def televisions. But given the choice, I'll always pick a movie of good substance and poor quality over a visual feast with a blah script and message.

A timeless and well-chosen subject

The theme of Flywheelis transformation - personal, practical, and real. The main character, used car dealer Jay Austin, goes to church once every two weeks - and cheats his customers every day in between. With his business failing and his marriage on the rocks, Jay finally realizes that there is only one way to fix his life: surrender it completely to Jesus Christ. Flywheel takes a realistic look at what that means. There is nothing theoretical or hypothetical here. The choices Jay faces are as practical as a stack of money - and sometimes, they take that very form. This is a fairly involved story with several turns and least two climaxes, but I don't want to ruin it for you. Just get the movie and watch it yourself, if you haven't. You will be challenged to re-think what following Jesus means in the real nine-to-five world.

A used Honda full of laughs

If you've watched any Kendrick movies, you no doubt are familiar with their brand of humor - clever, folksy, and family-friendly (apart from the occasional foray into questionably-tasteful pranks). True to form, Flywheel contains some hilarious interactions, mostly involving Jay's "dream team" of salesmen. Played to perfection by Treavor Lokey and co-producer Tracy Goode, these two guys are an absolute scream. Again, I'm not going to ruin it. Just watch the movie!

The story behind the movie

While the storyline of Flywheel is interesting and compelling, it does have the same basic disadvantage shared by all fiction: it didn't really happen. For that reason, I encourage you to watch the Making Of Flywheel featurette, thirty-odd minutes that tell a true story just as exciting as the fictional one. Back in 2002, when Alex Kendrick and his pastor had a certain fateful conversation about the cultural influence of movies, very few Christian films had been made. Most of them were purely evangelistic, and would have looked out of place being shown outside a church building. The independent film industry was in its infancy. Digital video was new, and people were just starting to realize that it was possible to make a viable movie without spending millions. The Kendricks realized it earlier than most. Catching their vision, the church raised a (very small) budget to buy a camera and a few necessities. What followed was a wild six-month ride, culminating in an almost unbelievably tight race against a release deadline. What impressed me most about the Kendricks was not their skill as movie-makers, nor their status as visionaries of independent film. It was their dependence on God, expressed at every stage of the project. The making-of feature includes footage from the very first shooting session of Flywheel. In this short video, Alex and all the crew get down on the floor and pray. This was something they would go on to do every morning of every shoot, and at each stage of distribution. Their dependence on God explains the amazing outcomes you'll learn about in the making-of feature.

For completeness, I want to mention the one element in the movie that I don't love. This is a theme that made an extreme re-appearance in Courageous, but also comes up once in Flywheel. Jay Austin, having just barely repented of his disobedient and ungodly life, immediately promises to "take his place as the spiritual leader of the family." This announcement seems premature; indeed, I'm not sure it's something that needs to be "announced" at all. As Jay grows into being the spiritual leader, his family will naturally come to view him that way. The same goes for the other worthy-sounding promises Jay makes to his wife in this scene. I love the fact that he specifically admits he has not been a good husband and father. But I wish that he would also admit something else: he never can be one, except by the power of the Holy Spirit. In order to be godly leaders, men need more dependence on Jesus Christ, not louder promises and stronger resolutions. The Kendricks seem to understand this core principle of dependence in their own lives, but I wish they would make it more clear in their movies.

These days, it is no longer a secret that movies can be made on a tight budget. And Christians - particularly homeschoolers - are filming everything in sight, releasing new movies faster than the fans can watch them. But before you install Final Cut Pro and yell "lights, camera, action," let me point out a few lessons from the movie that started it all - the simple and humble Flywheel.

Depend completely on God. To me, that's the lesson of Flywheel- and it applies whether you dream of making movies, writing books, starting a family, or anything else. Just depend on God. There is no telling what He can do from there. Visit the official site for Flywheel >>