For months I have been anticipating the release of The Lost Medallion, a new independent inspirational film intended for kids. Alex Kendrick plays the storyteller in the movie, and with his name attached, my expectations were high. Unfortunately, I was disappointed. I knew the film was very adventure-focused, but I wasn't prepared for the level of violence in a movie recommended for six-year-olds. Also, I was hoping for some sort of discernible Christian message. 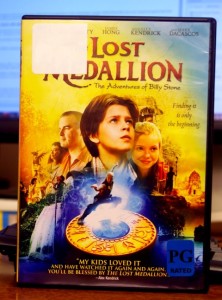 The premise of The Lost Medallion sounds okay, provided you don't object to time travel and magic. Billy Stone, the neglected son of an archaeologist, together with his friend Allie, discovers a long-lost magical object that grants wishes. Accidentally wishing themselves back in time, the two kids are pursued by a vicious warlord who is determined to get the medallion for himself.

Use your head; wear a helmet. And then, kick off other people's heads...

Some parts of The Lost Medallion are hilarious - but they aren't all the parts that were intended to be funny. One that really brought the house down was a chase scene where Billy and Allie are running from two present-day bad guys. One step ahead of the villains, they leap onto Billy's moped... and pause to don their helmets before taking off. Geoffrey the Toys-'R-Us Giraffe would be proud.

Yet the movie doesn't stay in such tame territory for long. When Billy and Allie are back in time, they are depicted fighting hand-to-hand with various adult bad guys. Mostly they use karate-style strikes and kicks; sometimes a sort of gnarled club with a heavy wooden business end.

Personally, I am uncomfortable with an inspirational movie showing children clobbering people in this way. Beyond that, the combat sequences feature gratuitous bone-crunching sound effects to multiply the level of intensity.

A wise sage who isn't wise

Many fantasy stories feature a sage or mentor character. He may be grumpy, like C. S. Lewis's Puddleglum, but he is usually wise - or at least mature. The sage of this tale, Faleaka, starts off by telling the children, "I was once just like you." Thereafter, he makes it plain that he still is. He hops around, takes chances like a kid, beats up bad guys with karate moves, and sticks his tongue out at the villains during moments of triumph.

In supposedly preparing Billy et al. for their quest of recovering the medallion, Faleaka spends most of the time teaching abstract lessons involving pineapples (one of which is inexplicably growing in the top of a coconut tree). His core teaching, when it finally becomes clear, is nothing more than reliance on one's own heart. More on that later.

An evil villain who's too evil

By contrast to his weirdly incompetent henchmen, Cobra himself is way creepier than the six-year-old viewer recommendation should allow. This character, played by Yul Brynner lookalike Mark Dacascos, has long black fingernails that he uses as venomous fangs. He actually kills people by seizing their throats with said poisoned fingernails, and this is done on-screen, with no effort to downplay what's happening. In one instance, he proceeds to fling the body into a yawning, fiery pit located under his lair. Later, he lets a snake loose in a cell where Billy is being held, which wakes Billy by crawling up his leg. And near the end, Cobra has one of the boys tied up and lights a fire to burn him alive.

I don't know about you, but when I was six, that sort of thing would have given me bad dreams.

In my opinion, it is possible to have an adventure story about children without making the children act like short adults. A good example of this would be the Chronicles Of Narnia books (I haven't watched the movies). Though the series had faults of its own, the children generally thought, talked, and acted more or less their own age. (More in the case of Lucy, less in that of Eustace; but I digress.)

The children in The Lost Medallion have a sort of swagger, an attitude of stiff-lipped defiance - toward each other and toward grown-ups - that is supposed to make them seem like mature and capable teens. Instead, they come across like childish adults. This is not untypical for children's movies, probably because producers know that children enjoy watching it. But what kids need is good examples, not reinforcement of their own alter-ego fantasies.

Some good acting and a good location, but that's about all

The Lost Medallion is a pretty good movie for around ten minutes at the beginning and end. Not coincidentally, these are the ten minutes that feature Alex Kendrick, together with Jennifer Rhodes and a gaggle of really charming "foster kids" in her care. The sub-plot with Alex and three of the children is rather sweet, though as we'll see, the moral remains muddled.

Thailand, where most of the film was shot, is a beautiful country. The urban locales are interesting, and some of the outdoor scenes are just visually smashing. On the downside, Thai culture seems to permeate the movie more than some conservative viewers might like. For example, several of the girls in the party scenes have odd pieces of their costumes missing in action.

By my count, God is mentioned twice in The Lost Medallion. Jesus is only referred to vaguely. Put in the best light possible, the movie tries to show kids that God made and loves them individually. Unfortunately, it strays from there into the aforementioned philosophy of relying on one's own heart. Yet the Bible says this about the human heart in its natural state: It's not good at all, but deceitful and wicked, and only a fool trusts in it (Jer. 17:9; Prov. 28:26). Indeed, that's why we need a Redeemer - but the subject of redemption doesn't come up in The Lost Medallion.

In the story, the Medallion is the all-important object. Though it's been buried for hundreds of years, the heroes seek for it until they find it; then they dig it up and put it to use. Like the Medallion, the Gospel is lost in this movie - buried under a pile of pop psychology and misguided adventure.

According to the film's producers, their mission is to "Creatively impact culture with the message of Jesus Christ." I couldn't agree more. Let's dig up the Lost Medallion, and use it properly next time.