What single demographic factor makes a young person ten times more likely to require drug rehab, five times more likely to commit suicide, and twenty times more likely to end up in jail? I'll give you a hint: it has nothing to do with skin color or economic status. The single factor is fatherlessness. With the breakdown of the family in America, few issues are larger or more important than the problem of fathers who are apathetic, irresponsible, or simply absent. It's not hard, then, to understand why the Kendrick brothers devoted their fourth movie, Courageous, to inspiring Christian fathers. 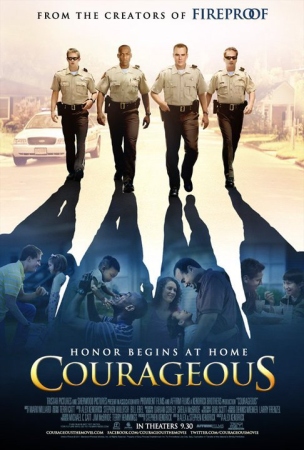 Courageous is a Christian cop drama - not the first I've seen, as it happens. Years ago I watched Heaven's Heroes, a seventies evangelistic piece by Mark IV Productions. Courageousis quite a bit more intricate than this early effort. Instead of one Christian cop with a heathen partner, there are four cops - plus a civilian friend - who describe various shades of gray in their spiritual walk. When challenged by a tragedy in one of their lives, they resolve as a group to be better fathers. When I say resolve, I mean they literally print, sign, and frame it. Then they try their best to live it out.

I didn't cry, but you probably will

I have never yet cried over a movie, but if I was going to, Courageouswould have been a likely - and worthy - candidate. The tragedy in the story is devastatingly real, but the restoration is also real, and you'll come away feeling victorious and encouraged. (They're good at filmmaking like that.)

Speaking of the tragic part, it should be noted that there are two occasions when characters address messages to a person who has died. Though they're not trying to communicate - just get closure - the whole concept edges toward questionable territory in a way that makes me uncomfortable. 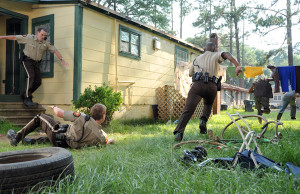 Okay, technically there's a little blood at the end - but not much more than the average shaving mishap. Of more concern is the climax fight sequence, in which two evil dudes chase after a little girl, then turn around and clobber the pursuing deputies. Though soft-spoken Christian gentlemen in real life, these fellows pack an enormous amount of physical power. From the commentary, I got the impression that the other actors were rather scared by the pretend combat. It's hard not to share that feeling when watching the finished product, even though the outcome of the fight is pretty much predictable.

Just as Facing The Giants and Fireproof made Flywheel look like amateur hour, so Courageousraises the bar yet again. From color correction to sound, from story pacing to stunts, I can't think of any area where the film could be improved technically. The acting is top-notch too. It's still an all-volunteer cast, but the occasional wooden moments are gone. Ken Bevel, a real-life Marine who plays one of the cops, shows particular improvement from his role in Fireproof.

When it comes to realism, the writers took extreme pains to make the movie line up with reality. The procedures of the sheriff's department, for example, are really those of local law enforcement in that part of Georgia.

Among the five dads in the film, three in particular are held up as mostly-positive examples. They demonstrate good attributes of love, protection, leadership, devotion, and hard work. As you might expect, there's also one bad egg; however, his failure didn't seem very relevant to the story's overall point. It's as if I made a movie about five people who go on a diet, and in the climax one of them "fails" - not by eating a cheeseburger, but by robbing the burger joint. Maybe I'm missing something, but I was left scratching my head.

In connection with this part, one of the stronger Christian characters exhibits what comes across as a rather prideful attitude. His actions and words seem to proclaim, "You failed, but I never will!" Galatians 6:1 and 1 Corinthians 10:12 come to mind.

Watch out for the cock-crowing

This movie is essentially a two-hour pep talk on Christian fatherhood. And a pep talk is great, but it's going to take a lot more than that to win the game. The movie exhorts fathers to be courageous, but it leaves an important question unanswered. What if a man is by nature not courageous? What if he's a lazy, irresponsible coward? Can he change just by "resolving" to change?

Let me answer that in a word of experience: no.

I am reminded of the Apostle Peter, who famously asserted that he would die rather than deny Jesus - and then denied Him just a few hours later. In all four Gospels, we are reminded of how readily Peter's "resolution" collapsed. But in the book of Acts, we meet an entirely different Peter. The same disciple who trembled before a servant girl now stands up to the entire Sanhedrin in the Name of Jesus. This radical change was not brought about by a pep talk. It was brought about by the Holy Spirit.

As I see it, this is what Courageousoverlooks. For all the talk about courage and faithfulness, the Holy Spirit is never mentioned. Indeed, dependence on God is only mentioned once (right at the two-hour mark, in passing). Without depending on the Lord and receiving his grace through the Holy Spirit, we cannot have true courage - no matter how loud we shout "I will!"

A puzzle with one piece missing

Have you ever worked a beautiful puzzle, only to find at the very end that you're missing an important piece? That's how I feel when I watch Courageous. Its examples of faithfulness are often inspiring, but utterly unachievable in mere human strength. Alex and Stephen seem to understand this, but somehow that understanding doesn't make it into the script. Instead it's consigned to the commentary track and music.

I only wish the movie itself carried the same message as its title song: "The only way we'll ever stand is on our knees with lifted hands; Lord, make us courageous!"