Do you like hymn stories? If so, you'll probably like Indescribable, a 2013 Christian movie based on the true story behind The Love Of God. Thanks to Joseph Graber and the Thorn Crown Project for providing a review copy of the movie, plus the DVD we're giving away at the end of this post. 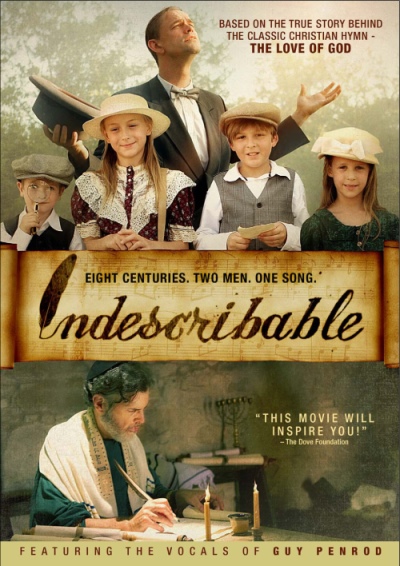 A good story with a sweet message

Indescribable is based on true characters and events, but it's only historical in general terms. It accurately depicts The Love Of God being written in 1917 by an American pastor named Frederick Lehman, who adapted the third verse from an ancient Jewish poem called Akdamut. The identities of the Lehman children and in-laws are also generally true to life. From there, it gets imaginative. In this version of the story, four of the Lehman children are involved in writing the song. Most of the movie is about their attempts to come up with a usable third verse. For eleven-year-old Blynn (Seth Pruski), what starts as an endeavor to make money for the family becomes a quest to understand what it means to love God. All this takes place in the midst of World War I upheaval, which touches the Lehmans personally as Blynn's older brother Walter (JC Scott) is drafted into the armed forces. Humorous family vignettes keep the story moving toward a decent climax. The ending is satisfactory, and the moral is clear.

Indescribablerises or falls on the performance of the youngest Lehmans, dubbed "The Fantastic Four" in the special features. Fortunately for the viewers, they really are pretty fantastic. Pruski impresses in the role of Blynn, self-appointed leader of the group. His one trouble spot is that he can't quite pull off getting mad at littlest brother Donald. Not sure if this is because Pruski is actually too nice and well-behaved in real life, or because Donald (Andrew Cook) is too adorable on screen. A little of both, I suspect. Most sensible and mature of the foursome is Fern, played by Danielle Duncan. She manages to exude innocent Victorian sweetness without seeming utterly unbelievable. She also does a great job of simulating blindness in her behavior. Youngest sister Wilma, played by sunny little Susannah Ely, makes an optimistic and loyal sidekick to round out the gang. Good actors - especially child actors - are better with a good director. Stacie Graber, the project mastermind and wife of writer and producer Joseph Graber, has past experience directing children's stage productions. This undoubtedly served her well in calling out the best possible performances from the younger cast members.

The Rabbi and the Akdamut

About ten minutes of Indescribableis devoted to the story of Meir Isaac Ben Nehorai, the Eleventh Century Jewish rabbi who wrote the original poem Akdamut. The sage is portrayed by Garry Nation, an experienced stage actor whose intense performance compensates for less convincing work by others in the medieval supporting cast. In this part of the story, the rabbi is unequivocally the hero. While this is appropriate, I'm concerned some children might get the idea that Judaism and Christianity are pretty much equivalent. Nation's portrayal gives the definite impression that the rabbi genuinely knows God. And while I'm sure that this man did his best to follow the Old Testament, the fact remains that it's impossible to know God apart from Jesus Christ. Hopefully parents will make sure this is understood, even as they teach their kids to love Israel and pray for the salvation of the Jews.

Authentic - at times, greasily so

Due to lots of volunteers and creative sourcing, the budget of Indescribablewas about $37K; according to the producer, it would have come in at about $250K at full price. Films in this budget range don't always score very high on period authenticity, so I appreciated the pains taken in that regard by the makers of Indescribable. Watching the movie, I have no trouble believing that I'm looking at early 20th Century buildings, streets, objects, and people. This kind of realism can of course be taken too far. One character in particular has his matted curls embalmed with such heavy hair oil that you can almost smell it through the screen. I'm sure people really did that, but a bit of artistic license in the makeup department would have been more than excusable. The characters' behavior is period-consistent as well. Rich Swingle, another talented stage actor who stars as Frederick Lehman, personifies late-Victorian propriety down to the diction of his every syllable. Family life in 1917 gets idealized a bit, but you can hardly blame the producers for hyping a favorite period of history. Less convincing than the film's modern section was the 11th-Century part. The "Worms City Gate" location was a nice touch, but overall the flashback part of the story felt like a generous-budget play rather than a movie.

We haven't heard the last of the Grabers

Having watched Indescribable, which was the first feature-length production by Thorn Crown, I am looking forward to seeing more from this talented couple and their friends. The next Thorn Crown production will be in the documentary genre, telling the true story of Joseph's background in the Amish. (There's a placeholder page up for the movie at this moment, but the full-blown website should be operational soon.) The couple is also involved with Philip Telfer's new Christian Worldview Film Festival, an apparent (smaller) successor to the late lamented SAICFF.

Get "Indescribable" for your family

If you haven't yet seen Indescribable, it's worth the price of a DVD copy. But first, why not enter our producer-sponsored giveaway below? You can sign up once with your email, then Pin or tweet the giveaway for additional entries.