Movie Review: The Redemption Of Henry Myers (plus a quick Elisha Press update)

It's been a bit quiet here on the blog for the last few months, but that's not because nothing is happening with Elisha Press. Indeed, the opposite is true. Just to write this post, I'm taking time away from my work-in-progress, which has been stuck just below 40,000 words for about two weeks. Plus there's another old manuscript in queue for editing, and also a "classic restoration" project still further back up the line. Movie reviews have slipped far from high priority in general, but after our family watched The Redemption Of Henry Myers, a quick vote indicated that this new release should be highlighted on the blog. Enjoy. 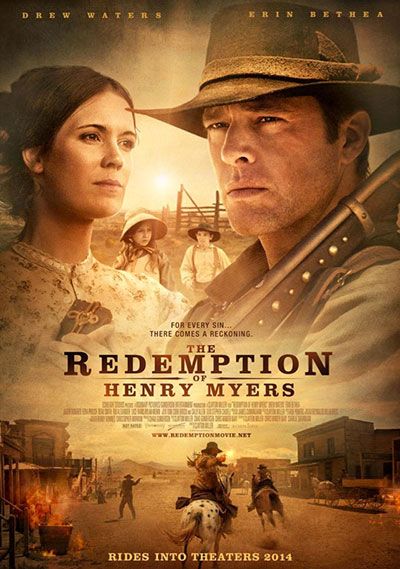 If you like cowboy reformation sagas in the tradition of Angel And The Bad Man, you'll love The Redemption Of Henry Myers. Drew Waters (Hiding In Plain Sight) makes a flawed but sympathetic bad man vs. the lovely but very human angel played by Erin Bethea (Fireproof). Overall I'd give the effort four out of five stars - at least one of which goes straight to little Jaden Roberts for her performance as Laura, the guileless ray of sunshine. Another goes to the writers, who took an old formula and made it new again with a clear gospel message.

Though I don't recommend this movie for kids due to intensity, it is refreshingly devoid of any sleaze or bad words. Instead the Name of Jesus is honored, Scripture is read, and truth is discussed frankly. I personally thought that some of these discussions could have been condensed without loss, but I am rather choosy in that regard, and this view wasn't shared by other audience members. In any case, the dialog-centered scenes are substantive, and a far cry from the pointless standing and looking that too often characterized old Ford westerns.

While there is only a drop or two of blood actually shown in The Redemption Of Henry Myers, much is implied. The movie opens with robbery and murder (as one might expect from a western) but it's the climax where things get really tense. Without going into spoiler detail, there is a highly threatening situation involving women, children, and weapons - including knives - and, while no unacceptable violence ensues, the tension drags on for quite awhile. My advice is to include your teenagers only in the viewing audience, or at least plan an extra half-hour before bed to change the mood. (I recommend Veggietales or a game of Dutch Blitz, depending on the hyperness index in your family.)

The concept of redemption resonates universally because it's needed universally. While you and I may not have robbed a bank or killed a preacher, our hearts without Jesus are just as dark as the heart of Henry Myers. Like him, each of us needs to face the truth and be freed by it so we can be changed. This timeless core message is communicated with class and talent in The Redemption Of Henry Myers.

Disclosure: This review was not solicited, nor was a sample provided.