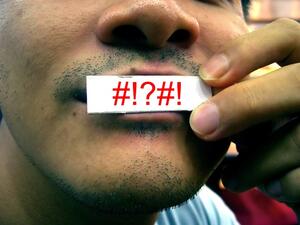 Have you ever encountered curse words in a Christian novel? It happened to me for the first time a couple of weeks ago. The book, which I'm not going to name, was written by an acquaintance of mine who is a Christian and a homeschool graduate. What was that word doing in this book?

I got in touch to find out, and received a long and gracious reply. While I won't quote it all here, the core justification seemed to boil down to this: In this setting, on this subject, profanity is authentic. To omit it would be unrealistic.

I replied at length, and what follows is part of of that reply. It's what I'd like the chance to say to everyone who writes in the Name of Christ.

First of all, I want to make it clear that I have no problem with referring to swearing, cursing, and even blasphemy, where necessary to the story. After all, the Bible does so in Lev. 24:11: "And the Israelite woman’s son blasphemed the name of the Lord and cursed...." But notice also what isn't in that verse: A direct quote of the blasphemy and curses. Indeed, in all of Scripture I cannot think of an example where foul language is repeated word-for-word. Can you?

In my experience as a writer, it's generally easy to communicate that swearing or cursing occurred without repeating the actual words. For example, you can always add "with a curse" to a quote, or "he swore" to the narrative. In the few situations where you can't, I would question the value of referring to the expletive at all.

On a practical note, it's worth considering that some portion of your potential audience - right or wrong - is going to avoid your work when they find out that it contains swear words. Is it really worth offending and losing those readers for the sake of a few four-letter words?

Even if you consider quoted expletives worth the cost from a standpoint of readership, are you giving the least offense possible to the Church? (1 Cor. 10:32). Are you glorifying God? (1 Cor. 10:31) Are you preventing any corrupt word from leaving your mouth - or your pen? (Eph. 4:29)

You may well disagree with my perspective; the recipient of these words did. I didn't judge that person, and I won't judge you. Like many things, this issue boils down to one of personal conscience. The Bible doesn't stay "thou shalt not repeat any of the following words in a book...." It just doesn't, regardless of how strongly I feel about it.

But all the same, let's not agree to disagree. Let's agree to keep seeking God, staying in the Word, and sharpening one another as the Lord affords opportunity. Let's not look for what's permissible, but for the things by which we may edify one another (1 Cor. 10:23, Rom. 14:19).

If anyone wants to comment (including the author of the book, who has received a link to this article), please do so below. Be advised, however, that cuss words quoted outright in the comments will be bleeped.